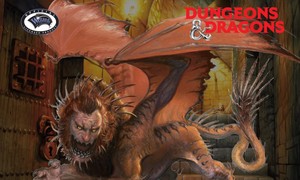 Set in an atmospheric dungeon environment with a rich spooky music soundtrack, the Manticor battle SoundSet will not disappoint. This manticor's deep thunderous voice is complemented by leathery wing-strokes of considerable heft and triggerable tail spike sounds that will have your players ducking for cover every time.

From the Monster Manual:
A manticore has a vaguely humanoid head, the body of a lion, and the wings of a dragon. Its long tail ends in a cluster of deadly spikes that can impale prey at impressive range.

This SoundSet was imagined, compiled, designed, created, mixed and finished by Benjamin Loomes of www.syrinscape.com, using samples created by them and also the following list of samples from the collaborative Internet database of creative-commons licensed sounds freesound.org:

All weapons recorded and mastered by Benjamin Loomes at www.syrinscape.com

Art provided by Wizards of the Coast LLC.