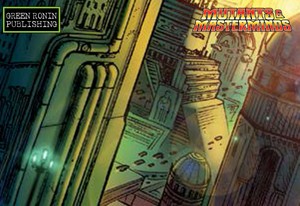 In a crater on the far side of Earth’s moon is a hidden city, thousands of years old. Its inhabitants, the Farsiders are the descendants of humans taken from Earth by the alien Preservers, the same race that seeded humanity across the galaxy. The Preservers built Farside City in a deep crater, along with atmospheric generators, and settled a number of humans there. Apparently, they used the city as some sort of outpost or perhaps a “living laboratory” to study humanity. They may have also intended the city to ensure the survival of various species (including humans) if something happened to wipe out life on Earth. If you need a slightly off-putting location for your players to tentatively explore, then the "Farside City" SoundSet will most certainly fill your game with a sense of mystery and suspense, oh and, poo too... every city, no matter how advanced needs a sewer... that's just one of the immutable facts of the universe!